If you have ever wonder about umbrellas, then you should check out all of these interesting facts about them.
Umbros was the Latin word that meant shadow or shade which led to the development of the world Umbrella. The original designs for the umbrella came from ancient Rome and Greece and that is where the modern-day umbrella gets their looks from. The parasol, a type of umbrella was viewed to be a symbol of power and wealth in ancient times and there was a tradition that would have rulers show off complex and exotic parasols.

Three thousand years ago, Chinese rulers had waterproofed umbrellas and they would show off 20 levels of protection wit ha multi-tiered parasol. However, they were still seen to be a fashion accessory for a woman, and they were small and foldable during 1000 BC to 400 AD in Rome and Greece.

It wasn’t until around the middle of the 18th century when it was acceptable for everyone to have an umbrella. Before then only women used them, and it was considered to be a fashion accessory in Europe. Jonas Hanway was the very first guy who would carry an umbrella in public in England. It was because of this that the umbrella was introduced to men all over England and eventually this reached the entire world.

It would be during the 19th century that fashion stated that a person had to hold an umbrella in the middle of the shaft and the handle had to point to the ground. Nobility in England often used green or blue silk to make their umbrellas.
If it wasn’t for technology becoming advanced during the 20th century, we would not have the mechanisms as well as materials that make umbrellas what they are today. In 1852, Samuel Fox had invented a steel ribbed umbrella. Eventually this would lead to Bradford Philips to create the very first folding umbrella that worked in 1969.
Right now, there are so many different types of umbrellas out there that you can purchase. They range from the more traditional forms up to crutch umbrellas which you can use as a cane or a walking stick and the types in between like bubble, compact, storm, and automatic umbrellas. And to this day umbrellas are still a really big part of fashion for the modern times.
Not to mention that umbrellas have managed to work their way into all new areas of modern times. Take for instance those coconut drinks that you can get in exotic locations will often have a tiny colorful umbrella in them. They are a huge staple for exotic drinks and cocktails.

Most of the world’s umbrellas are made in China. There is one city called Shangyu that is located in China that has well over a thousand factories that make umbrellas. They all use Teflon is to make the fabric waterproof and it is what keeps you dry.
Nicolas Sarkozy, French President was the very first person who started to use a Kevlar umbrella as part of security measures, which comes to prove that umbrellas can be a defensive and offensive weapon. You can use the whole umbrella as a weapon, or you can hide things in the shaft like blades. However, there are some security agencies that will modify an umbrella to be a dangerous weapon. The KGB had Georgi Markov assassinated by poison that was carried in the umbrella.
There are some religions that will use an umbrella was a part of special ceremonies. 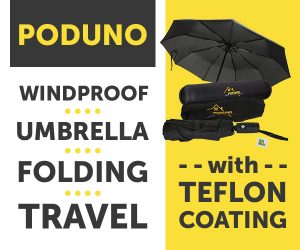